At The Beauty Show - Part Two

This is a continuation of the story we began yesterday where one of our staff accompanied a first time visitor to the International Beauty Show in New York City.

The Good, The Bad and The Not So Amazing

Our first stop was at a booth that unfortunately for Samantha, didn't apply to her position at the salon. The staff at the Demandforce booth greeted us and explained their product and Samantha explained that she was not a salon owner, and they were still gracious and excited for her when she explained that this was her first visit to the show. They asked about her job, what she enjoyed about it and if she had hopes that someday she would have salon of her own. The salon software that they were promoting did seem very complete and also included guidance on social media, something that is so important to any business these days. What really impressed us however was their staff. Even with the knowledge that Samantha wouldn't be a prospective client in the foreseeable future they were personable and engaged and seemed truly interested in what she had to say. The displays on the monitors around showed a very easy user interface and combined with the interaction with their staff, our conversation with Demandforce helped get our visit off to a very pleasant start. There are people out that that understand sales and promotion involved more than "close the deal right now" and with any luck, Samantha will have her own business one day and they already have a possible client because they were nice to her at a trade show. Can't beat that.

One of the things Samantha had wanted from the trip was a new pair of shears. There was certainly no lack displays from manufacturers, but there was a notable difference in attitude from the Demandforce booth. when it was apparent that Samantha was a new stylist and shears for hundreds of dollars were out of her range, she was dismissed out of hand. No planting seeds for the future with most of the booths we stopped to look at, even though it was apparent that she would work towards upgrading her equipment as she was able. One salesman actually snorted at her when she said she couldn't afford it yet. Though I don't think she heard it, I did. Not impressive at all.

At the Eye Kandy booth we were greeted by a gentleman very enthusiastically demonstrating their products. Glitter shadows that use something they call "Liquid Sugar" adhesive to apply. After asking how we would get it off again (regular make up remover) Samantha sat down for a demo application. We liked the effect of the thin glittery silver eyeliner, but really figured she'd blink three times and it would be on her cheekbones. Deciding walk around a bit more before she would or wouldn't purchase it, we gave it a trial run. After an hour, no moving sparklies and the line was still glittery and in place. She actually reached up and rubbed along her eyelashes, the glitter did not shift or transfer to her fingertip. This was a must have item for her and she took advantage of the show deal to buy 25 colors that she could pick out herself. That was definitely the "fun" purchase of the day. She also reported that it did indeed come off very easily with her usual remover.

A couple of stops to buy some hair clips and a t-shirt. Tomorrow, samples, a couple of must stop at booths that worked out well and a couple that didn't and her impression of the stage shows.

Stay Up to Date on Our Latest News 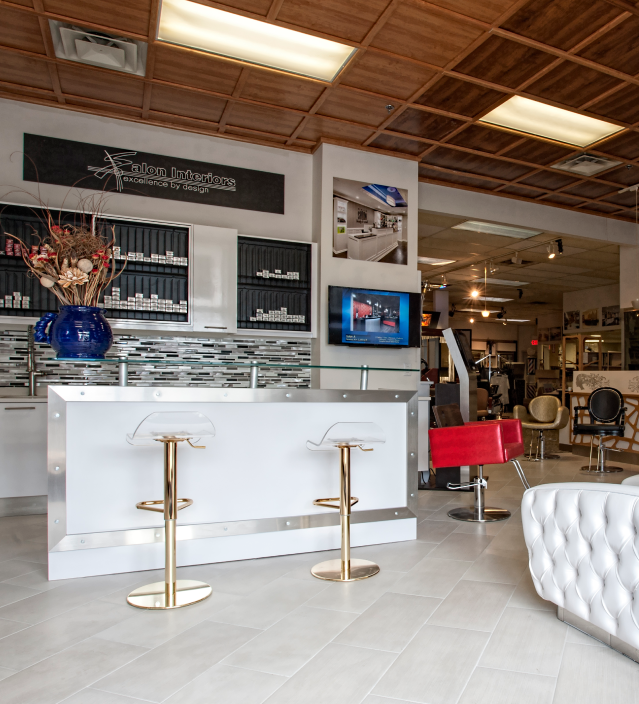 Stay Up To Date with Salon Interiors

Subscribe to our email newsletter to learn when we add new products to our online store, complete new projects, and are featured in local news outlets. Subscribers also recieve access to exclusive offers.
We respect your privacy and will never spam.
© 2023 Salon Interiors Inc. All right reserved.
Privacy PolicyTerms of Service